This tale begins many years ago when I bought a book called Albyn’s Anthology volume 1 published in 1816. I had always wanted to get hold of this song collection and a friend of mine, who worked in an antiquarian bookshop at the time, told me a copy had just come in to the shop, so I agreed to purchase it and she sent it to me in the post.
When it arrived it was a very large volume and I discovered that not only did it contain Albyn’s Anthology but many other books as well. These had been bound into one personal collection by a Captain John Grant in 1847.
In addition to Albyns Anthology was a rare copy of Donald MacDonalds “A Collection of the Ancient Martial Music of Caledonia called Piobaireachd and performed on the Great Highland Bagpipe” and a handwritten collection of Captain John Grant’s (1799 -1869) own favourite fiddle tunes as well as many extra and interesting tunes he had stuck into the book.
I enjoyed playing through the hand written fiddle tunes and one of them had an interesting note written on it “The tunes here have been sent to me by Drumnagarrow June 1844.” This intrigued me and I looked up Drumnagarrow to see  if I could find any more information. I found the tune Drumnagarrow (or Drumnagarry) and that Drumnagarrow was a well known fiddler called James Strachan (1783 - 1847)  from Glenbuchat, Strathdon.  . 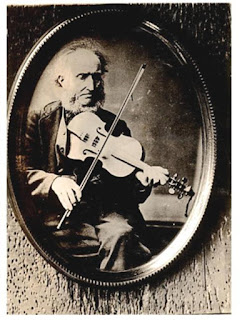 It is amazing that this characterfull portrait of him has survived.


=
He lived at 53 Drumnagarrow Croft high up on the hillside above Blackhillock farm in Glenbuchat.
I went to see James Beaton, the librarian at the National Piping Centre, to ask him about Captain John Grant and the Donald MacDonald Collection. He was very helpful and we spent a few hours looking up Captain John Grant and Drumnagarrow and gathered some of the information here.
James Strachan’s daughter Mary married William Hardie whose son was one of the Scotland’s most famous violin makers, James Hardie. The composer of the tune is a bit ambiguous from the information available - the tune has been attributed to Scott Skinner though in a note on the Glenbuchat website he is said to have attributed the tune to James Hardy with input by Drumnagarrow himself. The tune is also known as The Fisher’s Rant.
I found a photo of the cottage on the Glenbuchat Heritage website and the cottage was still intact but with no water, electricity or even a road to it. 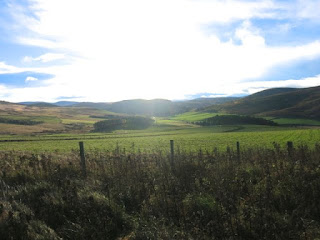 In February 2016 I was in the Strathdon area and I thought it would be good to go and see if the cottage was still there. I was staying with friends and asked if they had heard of this cottage which was about five miles away, and they had not. However the lady who kept sheep on my friend’s land came from Glenbuchat so we asked her if she knew about the Drumnagarrow croft and to our surprise she said yes and that she owned that croft and Blackhillock farm and to come over and have a look. She was actually selling the farm and 53 Drumnagarrow! 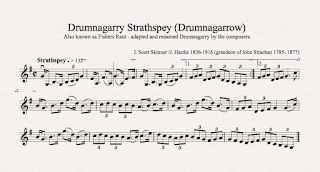 The next day we had an expedition and went to see where James Strachan the fiddler lived and it was all still there as it had been for two hundred years! It was a beautiful walk up to the house and the situation was amazing. There must have been people living there not too long ago as there were remains of furniture and even washed dishes on a stand in the kitchen. 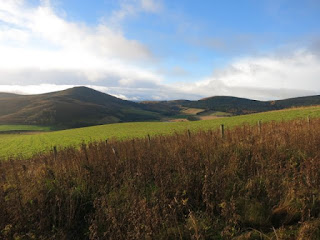 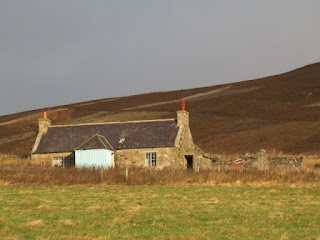 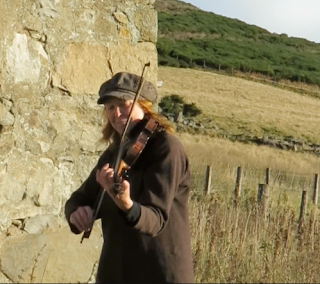 I took my fiddle up to the house and played the tune Drumnagarrow outside his door on a beautiful sunny day in February and it seemed a fitting tribute to the man who lived there nearly two hundred years ago.

I do hope the new owners of this house learn the history of James Strachan and keep his memory alive there.

I have enclosed some photos taken in February of Drumnagarry's house and a portrait of the man himself from the informative Glenbuchat website: http://www.glenbuchatheritage.com/picture/number675.asp

Posted by Christine Martin at 09:39